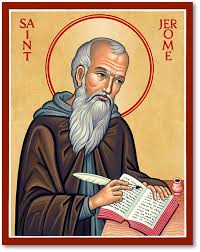 It was many years ago when, for the sake of the kingdom of heaven, I had cut myself off from my home, my parents, my sister, my kinsmen, and – what was even more difficult – from an accustomed habit of good living. I was going to Jerusalem to be a soldier for Christ. But I could not do without the library which I had collected for myself at Rome by great care and effort. And so, poor wretch that I was, I used to fast and then read Cicero…In about mid-Lent a fever attacked my enfeebled body and spread to my very vitals, what I say is almost beyond belief, but without cessation it so wrought havoc upon my wretched limbs that my flesh could scarcely cling to my bones. Meanwhile preparations for my funeral were being made. My entire body was already cold…Suddenly I was caught up in the spirit and dragged before the tribunal of the Judge. Here there was so much light and such a glare from the brightness of those standing around that I cast myself on the ground and dared not look up. Upon being asked my status, I replied that I was a Christian. And He who sat upon the judgment seat said: “You lie. You are a Ciceronian, not a Christian. Where your treasure is, there your heart also.” I was struck dumb on the spot. Amid the blows – for He had ordered me to be beaten – I was tormented the more by the flame of conscience. I repeated myself the verse ‘And who will confess you in hell?’ (Cf. Ps. 6:5). However, I began to cry aloud and say with lamentation: “Have mercy on me, Lord, have mercy upon me” …Finally…the bystanders besought Him to have mercy on the young man, granting me the opportunity to repent my error and then to exact the penalty if I ever again read books of pagan literature…To the surprise of all, I opened my eyes, which were suffused with such showers of tears that my grief produced belief in the incredulous…After that I read God’s word with greater zeal than I had previously read the writings of mortals.